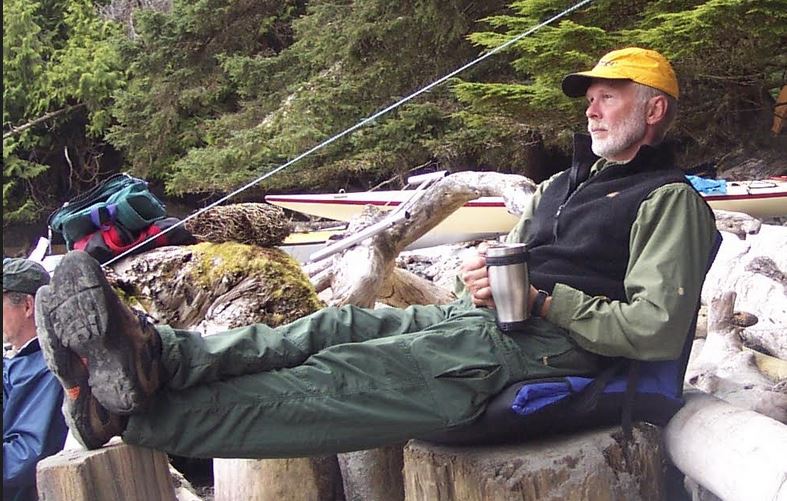 The park, located on the East side of Goletas Channel, comprises of a group of small islands at the entrance to Queen Charlotte Strait, including Hurst, Bell, Boyle and Crane Islands, and numerous other smaller islets.  The name God’s Pocket comes from not only the outstanding beauty of the area but also that the chain of islands provides protection from the sometimes harsh weather blowing down from the Queen Charlotte Strait.

Kwakwaka’wakw (also Kwakiutl, pronounced Kwa-gyu-thl) is a term used to describe the Aborginal native people who first called this area home. Traditionally, they relied on fishing for their main source of food. Men also hunted deer and moose, while women gathered shellfish, seaweed, roots, and berries. Kwakiutl groups moved seasonally between various semi-permanent camps to exploit resources, such as migrating fish or game. They constructed highly decorated multifamily houses out of wood and traveled in large dugout canoes. The Kwakiutl were organized into as many as 30 independent groups, each governed by a chief. The population was stratified by rank, which was determined by inheritance of names and privileges.

In 1792 the Spanish and English worked together to explore the waters between Vancouver Island and mainland. The British ships were much larger than the Spanish and could sail much more quickly while the Spanish ships could enter shallower inlets. As both countries made charts, many of the geographic features ended up with names in both languages. Goletas (Channel) is a Spanish word for “schooner” which descried their vessels Sutil and Mexicana.

European explorers and traders first encountered the Kwaikiutl in the late 18th century. The Kwakiutl soon began trading furs with the Europeans. In 1849 the Hudson’s Bay Company established Fort Rupert on Northern Vancouver Island, attracting four Kwakiutl groups to settle nearby. The Fort Rupert settlement grew quickly into the largest Kwakiutl community, becoming an important center for ceremonies such as the potlatch.

Prior to 1884, the potlatch ceremony played a major role in the Kwakwaka’wakw Society but the Canadian Gov’t outlawed the potlatch believing they were detrimental to the expansion of the nation’s wealth.

In the late 19th century many Kwakiutl became commercial fishermen or took up work in fish-canning factories. Although the Kwaikutl adapted relatively well to the new economy, European diseases decimated their population. The Kwaikuitl numbers declined from around 8,000 in the 1830s to less than 1,100 by 1930 but recovered after World War II growing to more than 4,100 in 1991. Traditional Kwakiutl culture has also experienced a dramatic revival.

On the drive up to Port Hardy, our kick off point, David Maxwell, Rob Dill, Henry Graymen, Rob Zacharias and I stopped in Telegraph Cove, the northern terminus of a former telegraph line that stretched from tree to tree along Vancouver Island’s east coast. The Cove also had a chum salmon saltery and a small sawmill but the old bunk houses have been turned into tourist accommodations along with a marina, museum, restaurants and shops.

The highest density of gray whales anywhere along the coast is found on the Northern end of Vancouver Island. Drawn by tiny bottom-dwelling organisms that make up their diet, the barnacle-encrusted gray whales abound in the shallow waters near shore. These 50-foot long whales feast day and night as they layer on fat reserves to fuel the longest mammal migration known; seeing their arching backs and flailing tails is a special treat.

Resident Orca (Killer) whales travel in stable family groups called pods and are organized on a matriarchal. Pods usually consist of several mothers and their offspring which generally travel together. Pods may have as many as 45 individuals, but the average size is 5 to 20. Orca’s generally swim at speeds of 2-8 km/h, sometimes traveling together but at other times dispersed over a few square kilometers. The dive sequence of individual resident whales usually consists of one long dive lasting 3-4 minutes followed by shorter dives lasting 15-20 seconds.

In the area other wild life can also be seen including: Pacific white-sided dolphins, harbor porpoises & seals, 1500 lb Steller’s sea lions, bald eagles, auklets, black oyster catchers, cormorants, bears, elk, wolfs, as well as a Sasquatch-like creature that are said to live on the islands.

Before leaving Port Hardy we stopped by the local outfitter, Pat Kervin at Odyssey Kayaking, who showed us on the charts the best camping spots off Goletas Channel and suggested a few places to paddle into. We also rented one of our boats from him.

Getting the empty kayaks loaded the first time is always a chore as we usually bring along way to much gear and food. In short order we become expects at filling every available space in the boats.  At the beginning of each trip the boats weight a lot and to move them usually takes at least four guys.  As the trip unfolds and gear is used, food consumed, the boats become a lot lighter. Over the years we have become good at taking gear that only increases our comfort and enjoyment.

Our first camp was tucked behind Nolan Point on Balaklava Island just off Goletas Channel. Most of the islands in this area rise directly out of the deep cool Pacific waters with rocky shores and heavy forests. Nolan Point is an exception in that it has a couple of grass meadows protected by occasional conifer trees.

As we have been going on our kayak voyages for a number of years, we have gotten pretty good at determining how to remain dry and warm. This trip had about the usual amount of rain so after the tents go up, large tarps are used put a roof over our head to use as a kitchen and sitting area.

Jacques Cousteau rated God’s Pocket area as one of the best cold water diving destinations in the world. Most diving takes place in Browning Passage, right outside our camp site.  A diving resort is to be found just south of us on Hurst Island, they also run kayak tours.

The swift currents, created by the change in tides, push large volumes of water between the countless islands along the coast. Often where and when we paddle depends on the direction of water flow.  If we are paddling against the current we will look for back-eddies found next to the shoreline where the water, because of the amount compressed through a narrow passage, is flowing in the opposite direction.

Commercial salmon fish farming operations, which are a series of floating holding pens attached to a barge, are tucked in a few of the more sheltered bays/coves. These operations are controversial; environmental groups state that the enclosures are infecting local salmon stock with diseases and foul the water underneath the holding pens.

This area is pristine rugged west coast terrain and is worth protecting. Over fishing and poorly regulated logging has already damaged this areas environment.

As it was time to move camp, the next morning after reviewing the chart and checking the weather, we paddled out down the West side of Gordon Channel next to Negei Island.  Along our route we discovered a sea cave, created by the pounding waves smashing into cracks in the rocky shore.  As the sea that day was without large swells, we were able to paddle into the cave which was large enough for the boats to turn around in.

Our second camp was located in a protected cove on north side Vansittart Island.  Since the weather was changing to mostly rain and fog we set up two protected areas as we were going to stay a while.

Due to the wet and blustery conditions, we postponed going back on the water and either hung around camp, telling old stories, reading, drinking coffee/tea or sleeping late in our tents. There is something very peaceful and secure while lying in a dry warm sleeping bag listening to the pounding downpour hitting the tent’s protective rain fly. It is a good time for reflection.

Camp chores, especially keeping a good supply of dry fire wood are just one of the many tasks that are shared by the group.  We each take a turn cooking, usually only one evening meal on the trip while another person helps with prep work and clean up.  Lunches and breakfasts are individual responsibilities.

The deer on the island were not afraid of us and regularly grazed close to our camp site on bull kelp left by the last high tide.  While hiking around the island we discovered a number of deer skeletons laid out in the deer’s last position. We didn’t see any wolf or bear scat on the island.

The forests on Vansittart Island are very green and lush with a mix of old growth timber, substantial salal undergrowth and a thick moss carpet. This woodland has never seen a faller’s chain saw because of its location on a small island some distance away from where logging in the area takes place. Once cut down, these forests will never grow back to their original magnificence or splendor and are worth preserving in their original condition.

Most of us live in urban settings so the opportunity for us to not only get out on the water in our kayaks but also to camp in the forest makes these trips very special.  One of the additional distinctive benefits we experience is a night sky without artificial lights. Lying on our backs, gazing up into the black night filled with brilliant stars is absolutely breathtaking.

Our next move was out into Bate Passage, paddling towards where it connects with Goletas Channel. This was done in pea soup fog using compasses and our navigational skills.  As we traveled down Goletas Channel, which is usually wind blown with large waves, it was utterly flat calm.  Out of our sight, in the fog, we could hear whales breaching around us, their breathing sounds muffled in the mist.

Our last camp was on a gravel bar created by the tidal action at the mouth of the Songhees Creek.  We shared the spot with the only other group of kayakers we encountered along our journey. The next day we paddled into Port Hardy and after loading our boats, headed south to home and loved ones.  A wonderful kayak journey in truly God’s Pocket.

Looking out for sea wolves