As I become more and more experienced with sea kayaking I find the more and more I deviate from the routing as outlined in my float plan. To quote Robert Burns, “the best laid plans of mice and men often go astray.”

This was the case recently during my week paddling in The Broken Group Islands. The inherent risks associated with the on water conditions though, should and will warrant a deviation from any plan.

The Broken Group is a group of small islands and islets in the middle of Barkley Sound on the West Coast of Vancouver Island, British Columbia, Canada. The group is protected as the Broken Islands Group Unit of the Pacific Rim National Park Reserve. The group lies between Imperial Eagle and Loudon Channels and includes Brabant Islands, Hand Island, but not the Pinkerton Islands. The southernmost of the group is Cree Island, the easternmost is Reeks Island. Benson Island, on the northwest corner of the Broken Group, is an important cultural site for the Tseshaht First Nation. 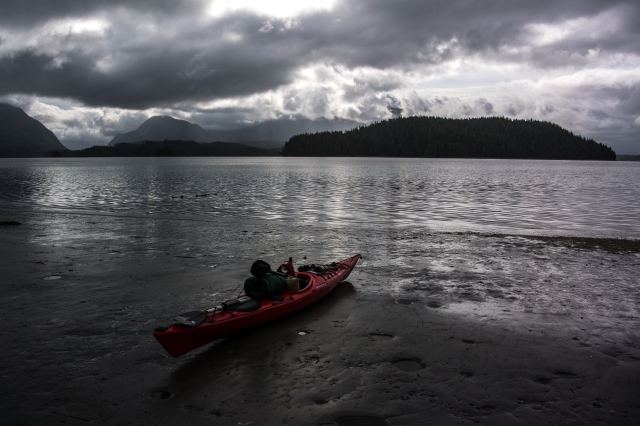 Surprisingly as soon as I launched into Toquaht Bay there was a gentle rolling swell, atypical I think of this bay? It would be a testament of things to come. I suspected there would be some remnants from the storm further north on the island. Half an hour later as I reached the edge of the Stopper Islets and David Channel I realized the true brunt of the storm, high winds and 1.5-2 meter crashing waves in the channel. I attempted to enter into David Channel but quickly made the decision to turn back. I contemplated heading east and hugging the coastline all the way around to Lyall Point but that idea also proved futile. This was only day 1, I didn’t want to give up. This is where the deviation from my float plan began. I then decided to explore the Stopper Islets for a suitable campsite. I didn’t notice the south picnic beach on the west islet, so I circled the rest of the west islet and didn’t find anything else. The crossing between the west islet and St.Ines Island looked possible, so I went for it even though the conditions were rough I made it and found a great campsite on the west side of St.Ines. A pesky crow greeted me as I landed at 12:45 pm and stayed close by for the rest of my stay. I was glad though to find refuge even though this is not recognized or permitted as a camping area. 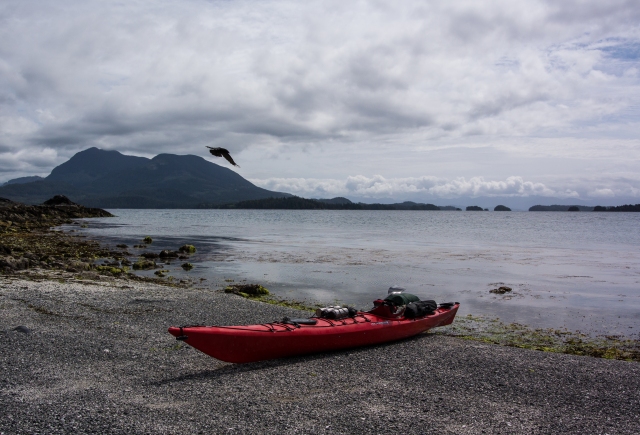 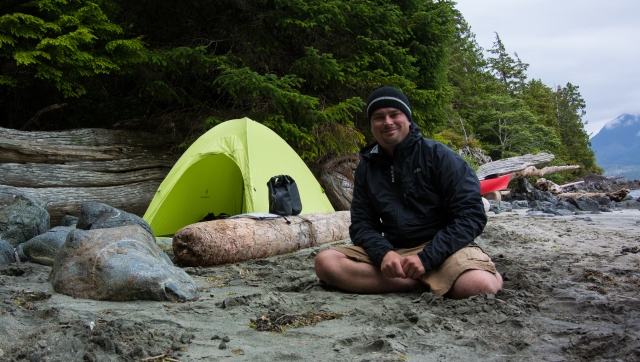 I departed St.Ines Island at 5:45 am in very calm water and no wind for which I was grateful. A rainbow appeared on the horizon just after my launch which I assumed was a good luck charm. 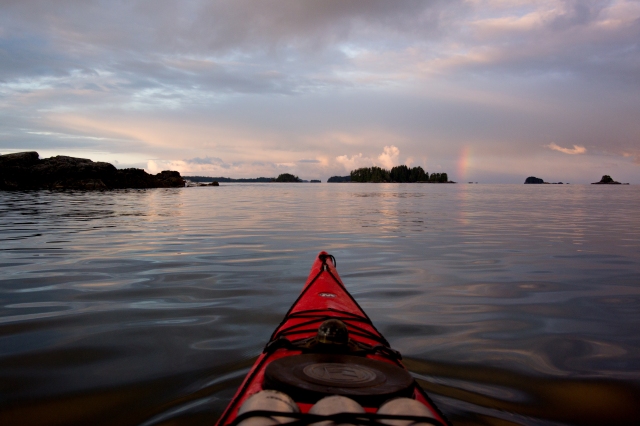 My original plan was to stay at Willis Island for a couple nights but given the favorable conditions I decided it would be best to push on to Clarke Island. The crossing between Turret Island and Clarke Island was windy with some rough water but I arrived at 8:15 am. Having either stayed or explored every designated campsite in the Broken Group other than Willis Island and Turret Island I believe Clarke Island may be the most visually appealing, though it is subject to the prevailing winds at times. 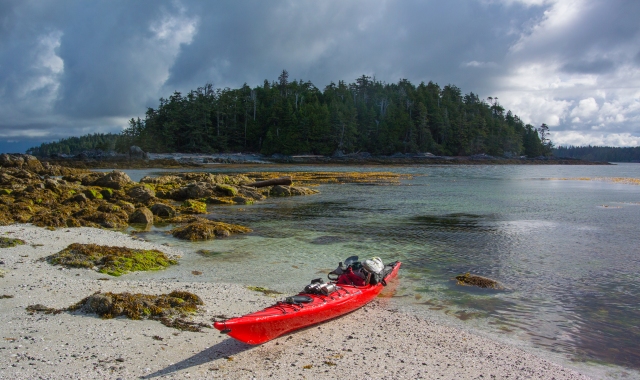 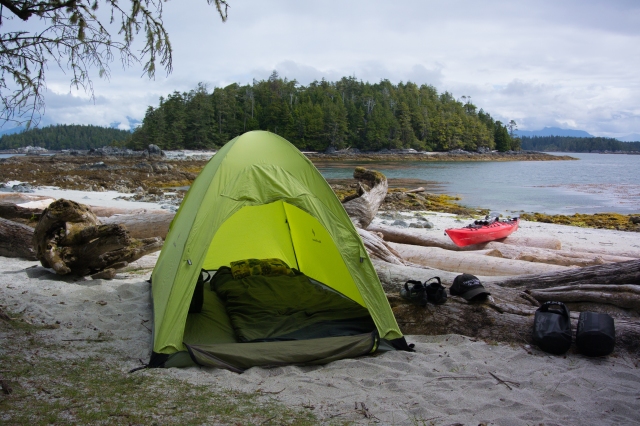 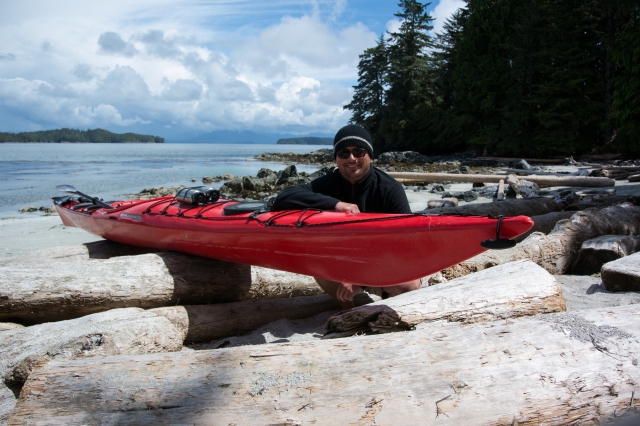 I was greeted at Clarke Island by Joe Leach and David Horkan, two serious expedition kayakers that were on day 13 of a circumnavigation of Vancouver Island. They started in Victoria and on day 13 they were already in The Broken Group! I applaud them both on their skills and abilities and thank you Joe for helping me carry my kayak up to the driftwood. Joe and David departed soon after I arrived, I bid them good luck the rest of the way. They planned on arriving back in Victoria on the 11th, 15 days after starting! Not bad at all, great job guys!

There’s many resident deer on Clarke Island, one in particular stayed close by my tent the whole time I was there. Later in the day the weather began to turn and a gentle rain began which lasted most of the night. I hunkered down in my tent around 8:30 pm and fell asleep by 10:00 pm. 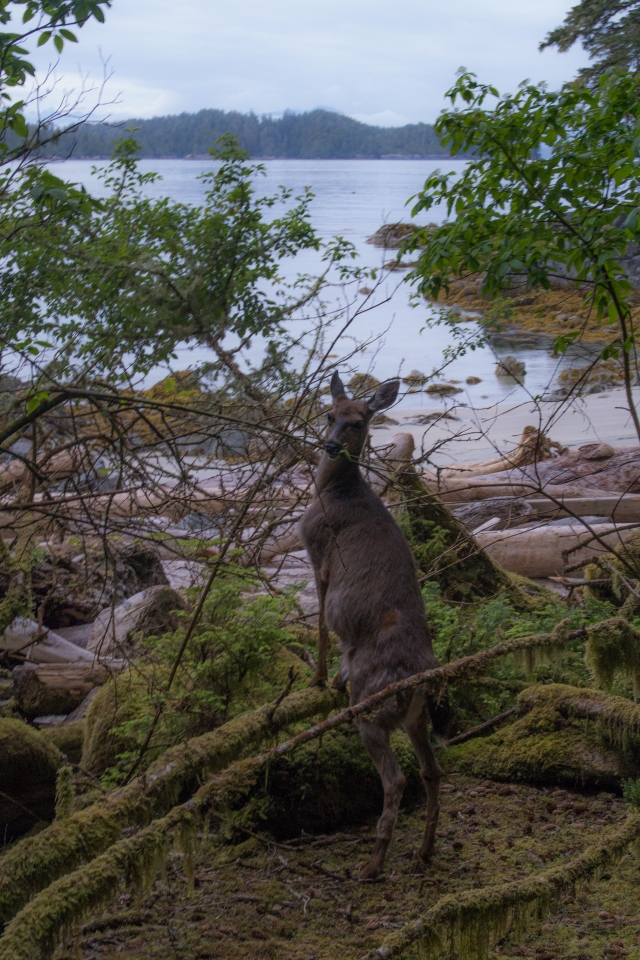 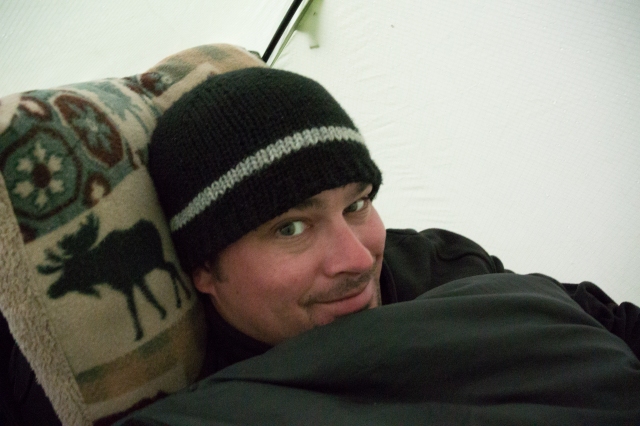 It was a wet and cold night, I kept warm but I had a somewhat dreary feeling when I woke, it was still over cast but fortunately the sun would break out not long after and the weather system that passed over seemed to hang over Vancouver Island allowing for generally sunny conditions for the rest of the day where I was. I spent most of the day in camp relaxing and reading Into the Wild by Jon Krakauer. It’s definitely one of those books that you don’t want to put down.

I slept in some, awoke at 9:00 am after a much better rest than the first night on Clarke Island. I decided to spend 3 or 4 hours exploring nearby Benson Island and circumnavigating Clarke Island. After having some breakfast I launched at 11:00 am. I found a sea cave on Benson Island. The on water conditions were still quite rough on the northwest side of Clarke Island and I rode some surf into the sheltered north islets and lagoon area. I followed a deer from islet to islet. 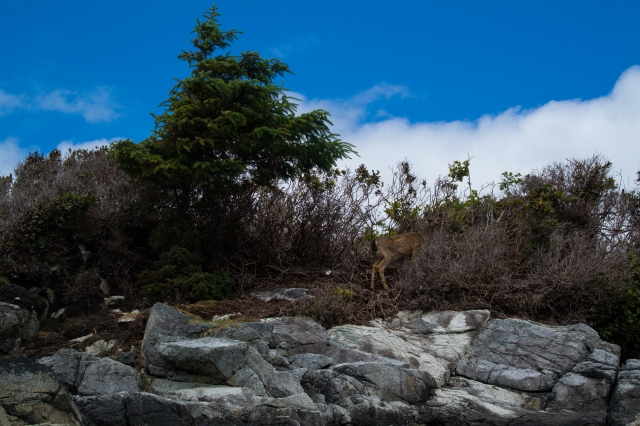 I arrived back at my campsite at about 2:30 pm, did some more reading and explored the northwest beach in the evening and watched the sun go down.

I decided that I would switch campsites. Clarke Island was spectacular but I was looking for some change of scenery and a little more shelter from the winds. I decided I would make my way to Dodd Island, some 8 km away. I broke camp and departed Clarke Island at 6:05 am. The on water conditions were quite calm. I was eager to paddle the narrow passageway in between Willis Island and Turtle Island again. In August of 2015 I paddled through this area in the fog and it remains one of my best paddling experiences yet. It proved equally as rewarding this time, tranquil waters and just incredible scenery, rocky outcrops and surrounding old growth forest. For anyone that has paddled through this area, you know exactly what I mean. I arrived at Dodd Island at about 8:15 am and explored the area but there was just something about it that didn’t seem appealing to me. Perhaps I was spoiled by Clarke Island.

I pressed onto Hand Island and arrived at 11:45 am. The Hand Island campsite was even less appealing, at least to me. There’s lots of natural beach wash and it’s not the best landing at low tide. I decided to make camp nonetheless. I had a short nap, woke and thought it would be a good idea to check the marine forecast which was not at all favorable. I’m definitely glad I checked. Gale force winds, rain and high seas were forecasted for the following day. At this point I decided that it would be best to pack it in and head for my landing at Toquaht Bay. The crossing to Lyall point looked reasonable until I got out in the water. The crossing included some of the roughest water I have encountered yet. I made it to Lyall Point and paddled hard across David Channel to the safety of the Stopper Islets and had no problem the rest of the way to Toquaht Bay, landing at 4:05 pm for a total of 47 km paddled.

Considering my original destination was The Bunsby’s and South Brooks, then Nuchatlitz, The Broken Group proved to be a great alternative due to unfavorable weather conditions further north. It was good to explore the northwest islands after spending time last summer exploring the southern sections. Pipestem Inlet and The Pinkerton Islands will be the next destinations to explore in this region. If there’s anything I regret, it’s the fact that for obvious space reasons I couldn’t pack my D810 and a wide angle lens. My Nikon 1 AW1 is a very versatile point and shoot but by no means can it perform tot he ability of a professional grade DSLR.

Martin Ryer - BC Marine Trails Vice President I live and paddle on Vancouver Island, the Comox Valley and surrounding areas. I feel most at home on the island, surrounded by not only the coastal and inland mountain ranges but also the Pacific Ocean, countless lakes, rivers, streams and the rainforest. To me, this beauty and tranquility is unsurpassed. I am inspired by and dedicate my efforts towards all those who know what it means and how it feels to paddle through the fog, ride the swell and land a kayak on a remote shoreline on the west coast of Vancouver Island.