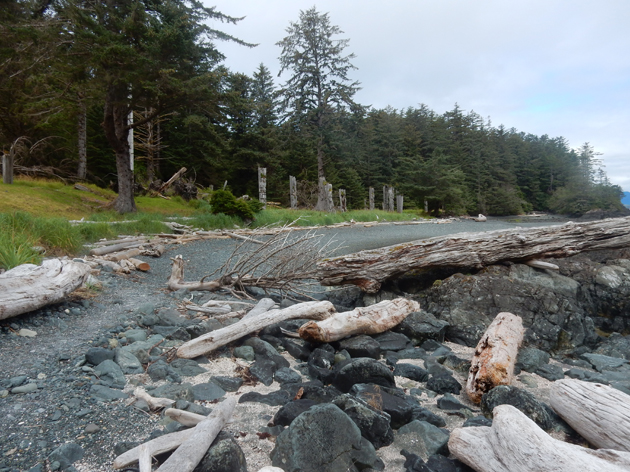 The success of our marine trail network development along the coast depends on respectful engagements with First Nations guided by our First Nations Liaison, the First Nations Working Group, a strong environmental Code of Conduct for visitors, and of course, the actual trail development work and maintenance through the Stewardship Program.

When we first began our engagements with First Nations communities along the BC coast, we had no templates or guidelines to direct our organization. We understood coastal peoples were the first users of marine trails, often the same pristine sites we currently use. As paddlers and recreationalists, we needed to recognize the importance of these sites to each Nation. We needed to bring together a successful program.

From 2009 to 2016/17, the BCMT strongly pursued recreation sites. The provincial Recreation Sites and Trails BC and the BCMT organization both thought this was a reasonable process to create a network of marine trails. It established the Sea to Sky Marine Trail and sites within the Discovery Islands, for example. While we respectfully engaged Nations during this period, our engagement was sporadic at best and aboriginal rights were not fully understood.

Creating recreation sites is a slow, tedious process. It’s also a formal process requiring partnership agreements, organizational overview, funding, infrastructure, insurance, and maintenance. Formal sites do have their place. Some sites do need to be managed, especially when overused. Help is generally required from a nearby community to maintain infrastructure like composting toilets.

Around 2018, BCMT leaders decided it was better to properly engage coastal Nations and discuss with them the future use of sites. Concurrently, we knew the organization needed stronger environmental guidelines to complement our trail building and First Nations engagement process. The Marine Trail Code of Conduct took about three years to research, discuss, and write and acts as the visitor guidelines for paddlers and others visiting traditional territories.

In 2018/19, with funding from the Real Estate Foundation of B.C., we formed the First Nations Working Group (FNWG), which would report to and advise the BCMT Board. Shortly after we hired Liam Ragan as our First Nations Liaison to support the FNWG and help enact their recommendations. Led by its chair Norman Marcy, the FNWG created a guidebook to provide advice around: a) background and legal context; b) a general approach and a “back to the basics” methodology and system when making contact; and c) specific and situational approaches based on BCMT priorities. In 2021, the Indigenous consultants Zakary Myers and Morris Prosser of Golo Sah Consulting helped us review and improve our guidebook and reflect on our overall strategy. Our guidebook was then updated based on the recommendations.

a) Background and Legal Context

In the fall of 2019, we hired a First Nations liaison through a Real Estate of BC Foundation grant. The liaison spent the initial months of the grant researching coastal Nations’ history and building a BCMT First Nations database, as well as developing a six-step engagement process. Time was also spent identifying specific sites within respective First Nations’ traditional territories.

We also needed a better understanding of the legal structure that has evolved over the last decade(s) in BC and Canada including the difference between Crown Land and Aboriginal Title. The BCMT is a non-profit working in the context of obligations between the Provincial Crown and the First Nations in whose territories the Crown is trying to make a land or resource decision.

“The Crown doesn’t recognize Aboriginal title unless it’s been recognized in court. First Nations don’t always recognize the term Crown land. For both parties the recognition of the others’ interest is perceived to be a diminution of their asserted rights” (BCMT guidebook, 2021).

Fourteen treaties were signed on Vancouver Island before 1871 – the BCMT works with some Nations in this legal context – but it wasn’t for another hundred years that Canada’s aboriginal peoples were able to pursue aboriginal rights in the Supreme Court of Canada. “With the exception of Treaty 8 and negotiations with the Nisga’a Nation, most First Nations had to wait until 1993 to pursue their aboriginal rights through the BC treaty negotiations process” (BCMT guidebook). Some Nations, such as the Tla’amin, have defined Aboriginal title lands through a modern treaty. Treaties give more certainty. While all First Nations have affirmed Aboriginal title under the Canadian constitution (Section 35), there is some uncertainty about how and where those rights apply.

The United Nations General Assembly adopted the  Declaration of Rights of Indigenous Peoples (UNDRIP) in 2007.  It was officially endorsed by the Canadian government in 2016, and was passed into law in BC in November 2019 . Importantly, under Article 32, Indigenous Peoples have the right to determine priorities and develop priorities and strategies for the development or use of their lands or territories and other resources. Our BC (and Canadian) government has not fully worked out how UNDRIP will affect crown relationships and consultations, however, First Nations expect government to live up to free, prior and informed consent. The BC Marine Trails is placed in the middle of this. Without a clear roadmap from both federal and provincial governments, and their respective ministries, it’s difficult for a non-profit to find its own roadmap (which is the partial purpose of our guidebook and engagement program).

b) Back to the basics

Why is the BCMT engaging with a particular Nation? Do we need help from the government at times?

We certainly begin by acknowledging a Nation’s interests and use of lands and waters. We may be seeking help for a Marine Trail (Cape Scott) or specific sites on a trail (that is, pullouts on either side of Quatsino Narrows). We provide data based on a traditional territory. In some instances, sites are removed from our map to protect archaeological or historical locations.

Our Marine Trail Code of Conduct is a type of visitor guideline which recognizes traditional lands and the importance of stewardship and conservation. Our Code is front and centre on our map and website. It’s important that recreationists respect a territory. This is part of our engagement process.

Safety is another pillar of our organization. In our negotiations of a protocol or agreement, the emphasis on marine traveler safety is very important.

Our guiding principles encompass working proactively with Aboriginal Peoples to build mutually beneficial relationships based on a shared understanding of our respective rights and interests. We respect existing and asserted Aboriginal treaty rights. We respect communities’ assertions regarding their traditional territories. We also want to emphasize early and timely discussions with local Aboriginal communities.

It was back to the basics in 2018/19. Like most organizations we had to establish our guiding principles and follow some key rules about being consistent, ‘do what you say you will do’, and adapt and look for synergies that emerge during engagement. As we move into 2022, we can apply our general approach and guiding principles to assist with specific and situational approaches.

In 2020/2021 we worked with nearly 30 First Nations groups. We did reach some agreements; we are still in the process of reaching additional agreements, or we simply could not get started on a process of engagement for a variety of reasons. Each engagement is specific and depends on the unique situation of priority issues.

The Cape Scott Marine Trail (CSMT) and North Brooks Extension history started in 2011 with the announcement of the West Coast Vancouver Island North trail. The name was later changed to CSMT. Some archaeological work was conducted in 2014/15 with an attempt to establish recreation sites in Quatsino Sound (the current BC minister does not want to establish more recreation sites at this time (2022)). Important contacts were made with people of the Quatsino Nation. In 2021 we worked on the same 3 rec sites with the Quatsino Guardians and surveyed additional sites for safety on the CSMT. At least one important site was removed from our map to protect an archaeologically significant location.

We shared data with the Heiltsuk Nation and signed protocol agreements in both 2016 and then again in 2021. This is our most formal agreement to date.

The shíshálh Nation requested the removal of informal sites in the Jervis Inlet and Texada Island areas in 2021. We issued this joint statement:

“The shíshálh Nation, BC Marine Trails (BCMT) and the Province of British Columbia are engaging in a collaborative process to establish better management of camping and day-use sites used by paddlers within the swiya (shíshálh) territory.   While this work is underway, paddlers are asked to use only designated Provincial Parks, Recreation Sites (RSTBC) and municipal campgrounds for camping while traveling through the swiya, as indicated on the BCMT map.

There are a number of additional, informal sites being used by paddlers that were documented and placed on the BCMT map prior to consultation with the shíshálh Nation.   During the collaborative process, those sites will be voluntarily removed from the BCMT online mapping system. We are jointly working now to ensure that all public use sites promote respect for the shíshálh, sustainability, and public safety.

Without using these informal sites, there are sections of the swiya that do not meet BCMT requirements for site spacing.  Please use caution and plan your coastal travel accordingly within the swiya.  Be prepared for extended paddling time between designated sites and maintain respect for land and marine resources at all times and locations.”

In 2022, we hope to visit sites in the swiya, work on inspecting them for possible use, and help determine the possible affect of use on the land.

I hope this article has provided background of the BCMT’s First Nations engagement program history, as well as a clear indication of our current projects and  future directions.

North Brooks gets a sprucing up