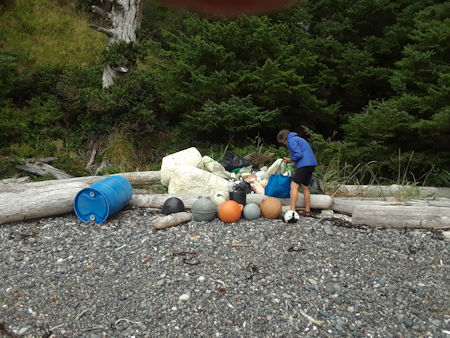 Gene on the beach

Arriving on the ‘Trashcraft’ we carefully navigated the 28-foot craft toward shore. It was 9:00pm and pitch black.

Renny, a Rugged Coast Research Society (RCRS) director, captained the boat while Gene and I, BC Marine Trails directors, kept a careful watch for logs and rocks. Fortunately, a support boat arrived with a spotlight, helping us navigate the final hundred metres to shore.

The Catala Island north BCMT campsite faces Vancouver Island and borders on the Rolling Rollstead, known for its shallow waters and sometimes its standing waves. Over the next hour eight or nine tents were pitched while one person stayed on one of the three boats. Some of us crashed early, while others talked to midnight.

The ‘Trashcraft’ is aptly named because it now carries RCRS trash (excluding the volunteers, of course). The aluminum boat used to be for divers. There’s lots of room for super sacks.

I awoke the next morning, stretching and examining the sky. Initially, I thought our camp was enveloped in fog, but then I smelled a whiff of smoke. The US West Coast was burning up. I sensed a contradiction: I’m here ready to clean up hundreds of pounds of Styrofoam, plastics, barrels and other debris. The smoke indicated a problem with our climate. Things are drying up, burning. Plastics litter our shoreline. If I had to rationalize at all about my personal dedication to ‘Caring for our coast’ the rationale itself enveloped me in smoke and surrounded me with debris. What could I say? Then my stomach rumbled and my mind turned to coffee, porridge and raisins.

The crew from RCRS were men in their thirties or forties all working full time as biologists, carpenters, plumbers, videographers. They all live in the same Nanaimo area and shared a passion for surfing, the outdoors and caring for the environment. Often their families accompany them. They have a really great camaraderie.

I decided to contact RCRS this year to establish a partnership with them. We can assist in the future with some fundraising (or grants) as well as organizing volunteers to come out. The BCMT mandate is wider than RCRS so a partnership is an ideal way to help ‘care for the coast’. This year COVID-19 disrupted our planning schedule, making it really difficult to organize any sort of paddling group.

Yellow Bluff Bay across the Rolling Rollstead became our first targeted clean up. This bay has a short but partially protected sand beach on the north end. Most of the beach is small pebbles, formed in two or three tables from low to high tide, each with a roughly 45-degree bank. Gene and I cleaned the first portion of the high tide and spray area, collecting a lot of bottles and small to large chunks of Styrofoam and other debris often wedged between logs. Later, I ran into a fairly large black bear at the south end, but he/she disappeared into the bush, quickly. I moseyed away, keeping my eyes open and staying alert. There were several scats.

Our second clean up focused on beaches around Catala Island Marine Provincial Park. Unfortunately, this park is not well-maintained with broken signs and a strong need for grooming and a need for some amenities such as a composting toilet. An incredible amount of Styrofoam blocks littered the high tide/spray zone. We had a reasonably good system to access the shore: a small 9-foot dinghy, surfboards, or landing the Trashcraft on shore if there was ample drop-off to run the diesel inboard and not break the propeller.

Two dogs on board sometimes accompanied the surfers, balancing on the front. Georgia, a shepherd-type dog, attached herself to me – I shared my lunch and water with her so naturally I became her best friend. She definitely preferred the shore walks to the boat cruising and maybe even liked surfing better.

On the last morning we finished piling super sacks onto two boats. Fortunately, a third boat from Shorebird Excursions unexpectedly arrived and volunteered to carry a load of Styrofoam blocks. If you know John thank him for us.

Where are all these blocks coming from? Broken up docks? There must be some accountability. Styrofoam constantly sheds small round particles that look like fish food. The fish eat these particles. They end up in our digestive system.

This trip met a lot of criteria for an outdoors person: camaderie, a beautiful quiet and wild location, some animals (sea otters), some fishing, and ‘Caring for the coast’. We left it a little better. Maybe we left it a lot better.

Kayaking in the time of COVID

It’s Been a Busy Year-ish