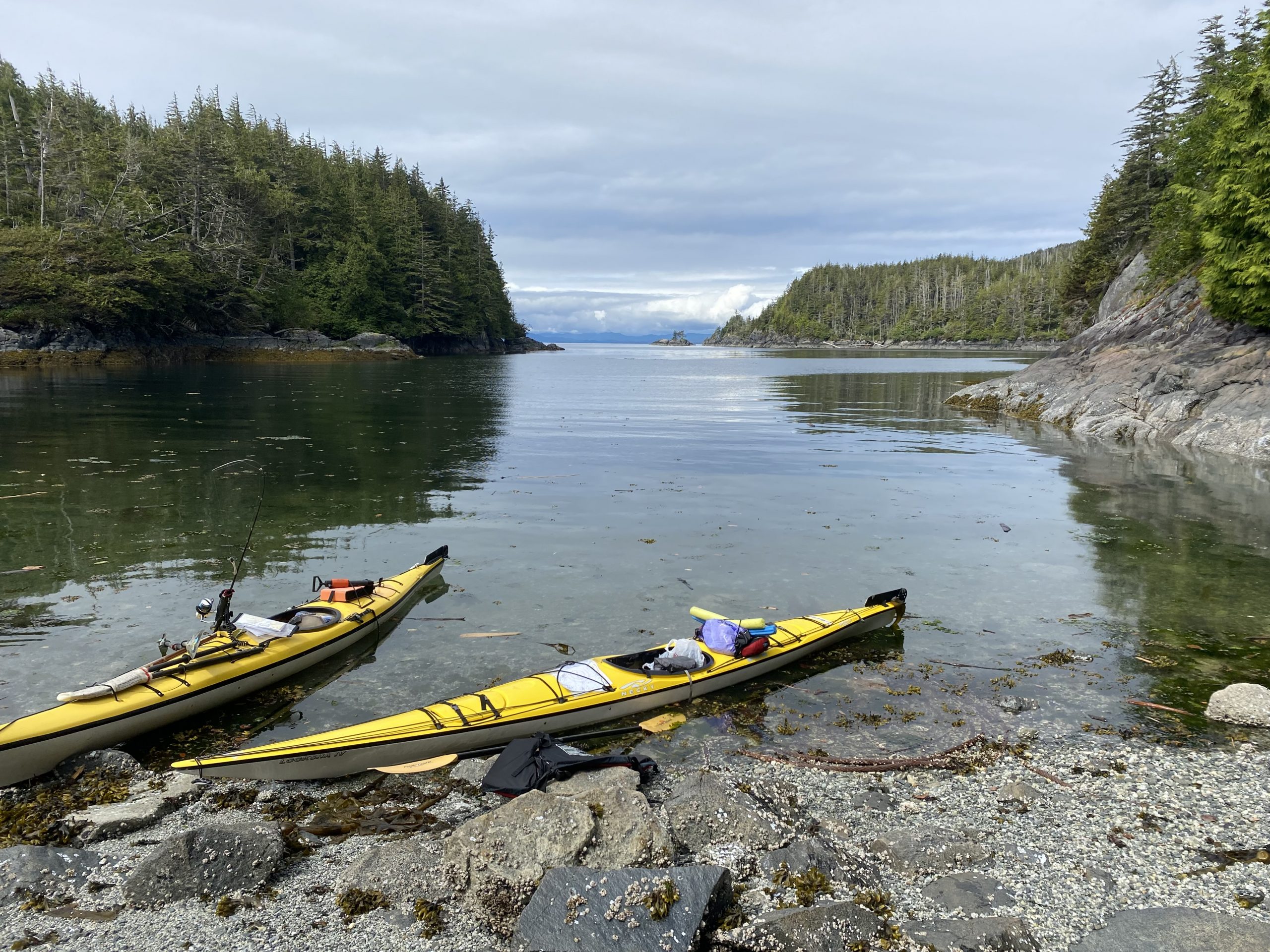 For most paddlers, any mention of the Broughtons refers to the southeastern region of this area, accessed from Telegraph Cove. Less well known are the reaches in the north and west. That is mainly because of what it takes to get there.

Paddlers ready for the 9 NM (3 hr) direct crossing of Queen Charlotte Strait should take note of the Numas Islands, which stand roughly 2/3 of the way across. 6 NM from Beres Point on Malcolm Island, they are a welcome rest stop for those heading north and a safe staging point for those heading south to wait for favourable weather and tide.

Navigation – Queen Charlotte Strait stands between the northern end of Vancouver Island and the mainland, opening to incoming weather and swell from the North Pacific. Paddlers are advised to plan crossings to consider the wind forecast and the ebb or flood currents accordingly. When approaching from the water, the largest bulk is the western island. A smaller central island is discernable as you get closer. A small, but distinct island at the east end of the chain is visible from far away as is the gap that separates it from the central island. This last gap (see [1] below) is important as it is a key indicator for: (a) navigating one’s orientation to the chain on approach from different directions, (b) gauging drift due to ebb/flood current. Crossings in fog and poor visibility are not advised as it is very easy to be carried far off course and miss the islands, even with a GPS. There are no habitations, commercial or recreational development on the islands, so no traffic to be concerned about. There are no navigation markers or lights on the islands.

Approach – As is typical of the region, shores are steep and rocky, however there are many pocket coves and beaches visible in passing all around the west and central island. (I did not have the latitude to inspect closely). Shelter in the lee of the islands can be found in most conditions. The best opportunity for a rest break is found on the central island in a well protected west facing cove (see [2] above or below) that is accessed in the gap between the west and central island.

On the north side of this gap, on the west shore of the central island is a break in the shoreline (see [1] above or below) that forms a natural boat run up into a pocket cove that appears usable at all tide levels. The upland behind this pocket cove looked to be usable for camping (see [2] below) as the brush and undergrowth in the trees was not heavy and level ground was visible in the openings further up.

Landing – I was unable to assess the landing (for potential campsite) other than a visual inspection (I was paddling to stay the slack between the ebb and flood during my solo crossing). The landing in the central cove is rocky (10-25 cm stones) and a gentle grade, accessible at all tides due to protected nature of cove.

Campsites – I was only able to inspect the upland (of the northern shore described above) from the shore in passing. Behind a stand of conifers were deciduous trees and low shrubs, which seems to indicate the area was previously cleared. With respect to the protected cove in the central island, opportunities for camping in the uplands accessible from this cove were very poor — too rocky, too much brush, no level ground.

Usage – Very little evidence of visitors to these islands.

Clearly more scouting is required on the Numas Islands to: (a) confirm the north shore of the central island is a viable camp site, and (b) exploration around the west island to identify other potential landings and campsites. If you have information on this site or any other, please contact our Trails Development team on how to use our Site Assessment tools.

Allan Edwin is a director of the BC Marine Trails and IT Team leader.

It's not what we thought it was.

Why I Paddle Solo